The Proud Boys is a far-right, male-only, neo-fascist white nationalist organization that promotes and engages in political violence in the United States and Canada. Established in the midst of the 2016 presidential election by VICE Media co-founder Gavin McInnes, the Proud Boys are self-described “Western chauvinists.” On February 3, 2020, Canada listed the Proud Boys as a terrorist organization.

Be sure to also read:

ABOUT THE PROUD BOYS 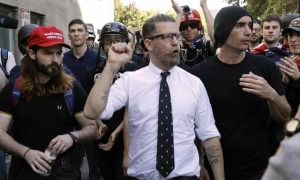 Created by VICE Media co-founder Gavin McInnes in 2016, McInnes began to distance himself from the organization in early 2017 in an apparent attempt to save face over accusations that the Proud Boys are alt-right and racist. In late 2018, McInnes formally disassociated himself from the organization after the FBI classified the Proud Boys as an “extremist group” with ties to white nationalism. McInnes claims to reject white nationalism while adopting laundered versions of white nationalist language. He has ties to the racist right and has contributed to such hate sites as VDare.com and American Renaissance, which publishes the works of white supremacists.. McInnes has himself said it is fair to call him Islamophobic. He announced the founding of the Proud Boys in the far-right Taki’s Magazine. McInnes has been banned from Twitter, Facebook, and Instagram for violating terms of service related to promoting violent extremist groups and hate speech. In June 2020, McInnes’s account was suspended from YouTube for violating policies concerning hate speech, posting content that was “glorifying [and] inciting violence against another person or group of people.” 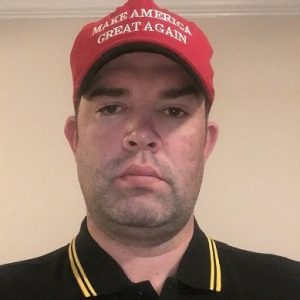 Known neo-Confederate dipshit and then Dallas-Fort Worth member, Jason Lee Van Dyke, was made chairman of the organization after McInnes stepped down. This title was revoked shortly thereafter when Van Dyke not only texted racial slurs to numerous persons when his cell phone number was leaked online, but also leaked the names of senior leadership within the organization by failing to redact personal details. Van Dyke was, at least until early 2021, the attorney of record for the Proud Boys according to a complaint filed against the group for burning a Black Lives Matter banner that was stolen from a historic black church in Washington DC on December 12 of the previous month. He also is recorded on audio as having attempted to join the neo-Nazi terrorist organization, The Base, in 2019. He is also accused of trying to arrange to have a rival assassinated. He allegedly used the Proud Boys Arizona Chapter to keep an eye on the person he wanted dead. Van Dyke pled no contest to a separate charge of filing a false police report in another incident and entered a plea agreement in that case. The suit-happy lawyer was suspended by the State Bar of Texas for making death threats for only a measly six months. Jason Lee Van Dyke, who is apparently again practicing law, lists a residential address in Decatur, Texas (Wise County) as his law office where he lives with his daddy. 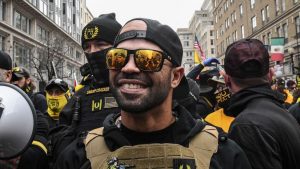 Enrique Tarrio, fed snitch and chairman of the Proud Boys

Enrique Tarrio, a snitch for both federal and local law enforcement, became the chairman of the Proud Boys in late 2018 after Jason Lee Van Dyke was removed from his position. Tarrio, whose legal first name is actually “Henry”, grew up in “Little Havana”, a neighborhood in Miami, Florida. He identifies as Afro-Cuban. A close friend of political rat-fucker Roger Stone, he was a candidate in the Republican primary election in 2020 for Florida’s 27th congressional district, but withdrew. He also served as the Florida state director of Latinos for Trump. Additionally, Tarrio owns 1776 Shop, an online vendor for right-wing and far-right merchandise, including a t-shirt emblazoned with the statement “Pinochet did nothing wrong”, referring to the Chilean dictator known for murdering leftists by throwing them out of helicopters. Tarrio attended Unite the Right in 2017 in Charlottesville, VA. He is a fourth-degree Proud Boy, which means he has engaged in political violence, in this case punching an antifascist in the face in June 2018. Tarrio helped organize a rally held in Portland, Oregon, on August 17, 2019. This event was co-organized by Proud Boy Joe Biggs, and was framed as a response to the June 2019 milkshaking of fascist and propagandist Andy Ngo. Ngo is well-known for making lists online of people he perceives to be antifascists which have been used as kill lists by the neo-Nazi terror organization Atomwaffen. Most recently, Tarrio was arrested for his involvement in burning a Black Lives Matter banner that was stolen from a historic black church in Washington DC on December 12, 2020.

PROUD BOYS AND “UNITE THE RIGHT”

After the deadly white supremacist Unite the Right rally in Charlottesville, VA on August 12, 2017, the Proud Boys went through a rebranding effort to try to salvage their image. Former Proud Boys member Jason Kessler helped organize the rally, which brought together a coalition of extremists including neo-Nazis, antisemites, and militias. Kessler was expelled from the group after the violence and condemnation of Charlottesville rallygoers.

Proud Boys are well-known for their embracement of bigotry of all kinds, including, but not limited to, white supremacist, misogynistic, Islamophobic, homophobic, transphobic, and anti-Semitic views. Proud Boys are also opposed to feminism and promote gender stereotypes in which women are subservient to men. Women and trans men are forbidden to join the Proud Boys.

The group has been banned from various social media sites including Facebook, Instagram, Twitter, and YouTube, however the platforms are notoriously lazy about deplatforming members and removing content. Canada designated the Proud Boys as a terrorist group on February 3, 2021, and the United State Justice Department has indicted several of its members for the role they played in relation to the storming of the United States Capitol. 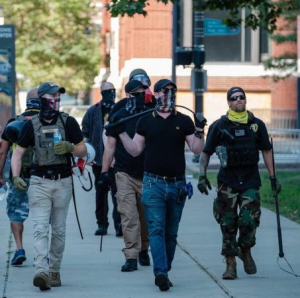 A group of Ohio Proud Boys, including James Earl Thompson of Vermilion, OH, with weapons.

The Proud Boys street gang  glorifies political violence against antifascists and leftists, re-enacting political assassinations, and wearing shirts that praise Augusto Pinochet‘s murders of leftists. McInnes is noted to have said in April 2016, “I want violence, I want punching in the face. I’m disappointed in Trump supporters for not punching enough.” McInnes also believes violence is “a really effective way to solve problems.”

“All I want to do is smash commies too. Actually I’m lying I’m way past just hitting them. When the time comes I will stop at nothing to fully eradicate them all.” – Anthony Mastrostefano, in a private chat associated with the Proud Boys, spring 2019

“I am not afraid to speak out about the atrocities that whites and people of European descent face not only here in this country but in Western nations across the world. The war against whites, and Europeans and Western society is very real and it’s time we all started talking about it and stopped worrying about political correctness and optics.” – Kyle Chapman, who formed the Fraternal Order of Alt-Knights, a paramilitary wing of the Proud Boys, Unite America First Peace Rally, Sacramento, California, July 8, 2017

“We brought roads and infrastructure to India and they are still using them as toilets. Our criminals built nice roads in Australia but aboriginals keep using them as a bed. The next time someone bitches about colonization, the correct response is ‘You’re welcome.’”
– Gavin McInnes, “10 Things I Like About White Guys,” Taki’s Magazine, March 2, 2017

Any man – no matter his race or sexual orientation – can join the Proud Boys as long as they “recognize that white men are not the problem” a statement that attracts many racists to the organization.

Members of the Proud Boys street gang are identifiable by their double yellow-trimmed, black knockoff Fred Perry polos and catchphrase “Uhuru!” – a Swahili word they picked up from a YouTube video in which an activist talks to white people about reparations. 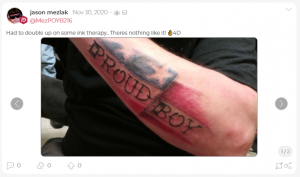 Their name comes from the Aladdin song “Proud of Your Boy.” The coke-snorting leadership of the Proud Boys promotes a list of libertarian-leaning principles such as opposition to the drug war, racial guilt, and political correctness.

Proud Boys neo-fascist street gang has four degrees of membership which include a loyalty oath and engaging in violence.

Members of the Proud Boys can be identified by their use of black and yellow Fred Perry polo shirts, American flags, MAGA hats, and military armor. Members often carry guns. Additionally, members are forbidden to masterbate–except for once monthly. 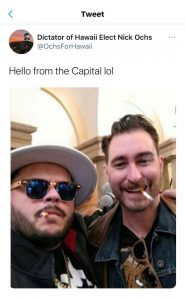 On January 6, 2021, many members of the Proud Boys participated in the storming of the United States Capitol building, where some members of the group appeared wearing orange hats and orange tape. Some members wore all black clothing, rather than their usual black and yellow attire, as fed snitch and chairman of the organization, Enrique Tarrio, had suggested in a Parler post days earlier. This was an apparent hair-brained reference to mimicking the appearance of antifascists. Tarrio is facing felony charges in DC for vandalism and weapons violations. He is accused of burning a Black Lives Matter banner that was taken from a Black church in December 2020. Due to fallout of the Proud Boys’ involvement in the Capitol siege, former lawyer for the fascist street gang and one-time chairman Jason Lee Van Dyke announced in February 2020 that he is terminating their LLC and trademark. Van Dyke is also a failed applicant to the neo-Nazi terrorist organization, The Base.

The Proud Boys is a far-right, male-only, neo-fascist white nationalist organization that promotes and engages in political violence in the United States and Canada. Established in the midst of the 2016 presidential election by VICE Media co-founder Gavin McInnes, the Proud Boys are self-described “Western chauvinists.” On February 3, 2020, Canada listed the Proud Boys as a terrorist organization.

Be sure to also read: