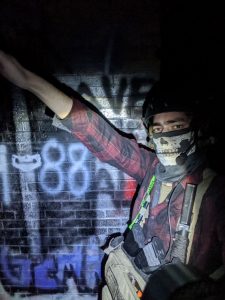 Dalton Dixon of McKinney, Tx gives a siege heil. The “88” in the image is shorthand for HH = Heil Hitler

George Floyd was murdered on May 25th, 2020 and while that week the uprising started in several cities there was no major protest in Dallas until Friday the 29th. Dallas has a strong but loosely knit leftist community and has never been known as a hub of protest or social change due to several factors, not the least of which, have earned the city the nickname “City of Hate”. Right wing militants and extremists are so common in North Texas that certain things that go on here that are given very little attention would cause a full scale panic most anywhere else. Merely attending a leftist protest here is a revolutionary act and putting yourself in danger. Angry white men showing up armed, with the full support of law enforcement, is expected and dealing with that factor is considered part of supporting leftist causes in North Texas.

Learn about these Hate Groups operating in Texas: 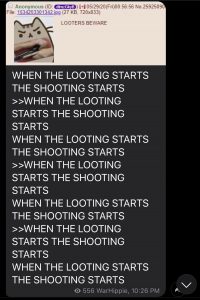 The evening before the first Dallas protest a man by the name of Dalton Dixon aka “WarHippie” began divulging his plans for the following day via the social media platform Telegram. Laying out his gear and downright being giddy at the possibility of riots the following day. Repeating Trump in saying, “When the looting starts, the shooting starts” adding, “ITS NOT JUST IN MINNEAPOLIS! SOCIETY IS FALLING! THIS IS IT BOYS! RACE WAR NOW!” Even for North Texas this type of rhetoric is very alarming. 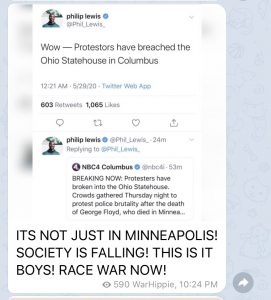 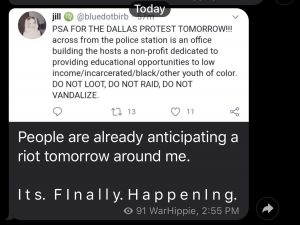 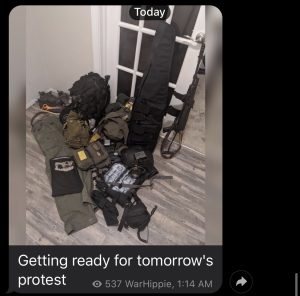 The Telegram social media platform is home to every flavor of right wing piece of shit for very good reason. It’s very lightly monitored and tough to track individual users from channel to channel but antifascists are everywhere and they were monitoring WarHippie and documenting what he was planning. We can confidently assess that he truly believed that he wasn’t being watched.

We are still unsure what antifascists (thank you, you saved lives) outed Dalton Dixon’s plan but it was communicated to journalists at Left Coast Right Watch and they started attempting to alert people in Texas immediately. We still, to this day, cannot express how much we appreciate the day in and day out effort of @LCRW. WarHippie posted his guns, his gear, his threat to the protest, him giving the roman salute, and on the afternoon before the protest a cryptic message driving down the freeway and @LCRW rightly hit the alerta button.

#HOUSTON #TEXAS #BOLO “WarHippie”—“a committed nazi accelerationist with a gunsmithing degree” just posted this on a telegram channel. I’ll contact some serious researchers with the channel soon. I don’t want to give it new followers. pic.twitter.com/6nI6jEgF7q 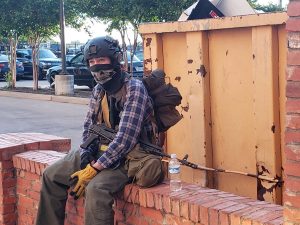 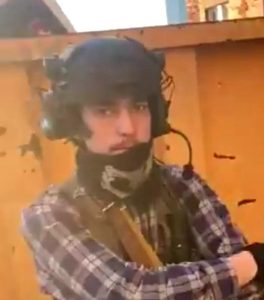 We identified that he was driving on Highway 121 in the north Dallas suburbs headed toward the protest and he was streaming his location via Telegram after he arrived at the protest. We identified exactly where he was and one of ours was on the way to confront immediately. Upon arrival Dixon was identified catty-corner to the protest in the company of 4-5 boogaloo boys (fuck boogers too). Dixon was addressed as “WarHippie” and he confirmed that we had the right person. From there our person on the ground started pulling out the receipts and Dalton Dixon knew that he was doxxed and was about to have a very bad day.

Our person that confronted Dixon expressed that he was not there to hurt him but was going to remain with him until he left the protest, Dixon complied.  Soon a crowd was gathering and realizing the gravity of the situation he started to make his way back to his vehicle.  At this point is where the video of him was taken with his mask falling down.

A small crowd physically walked Dalton back to his car, he attempted to get in the front seat with his rifle and was told to put in his trunk which he complied with as well. As he was being doxxed by his license plates, he sped off. Dalton Dixon, son of Hiram Dixon of McKinney, TX a suburb north of Dallas.  The El Paso shooter is from right down the road in Allen, TX. Collin County, north of Dallas, is a hotbed for racists and fascists.

Here is what we know about Dalton Dixon going forward:

Any information is always appreciated. The cops don’t give a flying fuck if someone kills protesters or anti-racists, they are not here to protect us. We Protect Us!

Learn about these Hate Groups operating in Texas: